What do the Wizard of Oz and sustainability have in common? 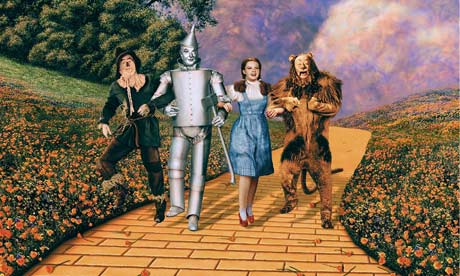 ‘Unusual weather we’re having, ain’t it, said the Cowardly Lion when snow falls on a poppy field. The Wizard of Oz has many links to the sustainability debate. Photograph: Allstar/MGM/Sportsphoto Ltd./Allstar

What comes to mind when you hear these four words: The Wizard of Oz? Unless you have been hiding in a cave for years, even decades, the chances are that a cascade of images will come to mind. In an era when we are starting to worry about climate chaos, the line spoken by the Cowardly Lion when he sees snow falling on a poppy field has great relevance: “Unusual weather we’re having, ain’t it?” The extraordinary memorability of Frank Baum’s story made into film – by some calculations the most-watched ever – demonstrates the immense power of storytelling.

At a time when we are encouraged to use storytelling to engage audiences which would rather not think about climate or other sustainability issues, we have a number of options. We can write a completely new story, which is difficult with several thousand years of literature accumulated around us, in bookshelves and Kindles. We can plagiarise, something that is both easier (cut and paste) and harder to do with Google and other search engines – now that we can search for suspicious patterns in text. Or we can go the homage (or the hermit crab) route and adapt an earlier structure to new needs.

We have just begun work on a new project with ad agency JWT focusing on the inter-generational equity core of the sustainability agenda, and I have been playing with possible narratives. One that came to mind a few weeks back was The Wizard of Oz – and the more I wore the hermit crab hat, the richer the potential associations became.

The film first appeared in 1939, in a world teetering on the edge of war. At the time, an enormous number of people were still in denial about what lay ahead, as so many of us are today in relation to the sustainability agenda. In many ways, we all live back in Kansas, a world in which people knew who they were and what was expected of them – but cyclones, tornados and hurricanes (you could add in the odd earthquake and tsunami there, too) are signalling that powerful forces are at work in the world, threatening the old, comfortable ways.

Once you start to think it through, Dorothy becomes our young, female Everyman, Generation Y, cast adrift in a new order – and forced to make the best of things. The Munchkins are ordinary folk, perfectly happy to turn a blind eye until Wicked Witches can be ignored no longer. Like ordinary Britons, many people today are perfectly happy to accept pieces of paper waved after UN climate summits that all is right with the world, exactly as their grandparents and great-grandparents did when Neville Chamberlain returned from his meeting with Adolf Hitler in Munich.

The Wicked Witches are the great challenges that we fear to face – and the flying monkeys the lobbyists and other distraction who are sent hither and thither to sow doubt and stall the future. Some of the Witches in today’s world are real, others concocted to keep us in order – and telling which is which can be a stretch.

The Yellow Brick Road is the royal road to sustainability, with the Emerald City (could it be China’s Dongtan or Abu Dhabi’s Masdar?) serving as the shimmering, mirage-like utopian future that we yearn for and strive to reach. After almost 25 years of sustainability, since the publication of the Brundtland Commission report in 1987, we are still in the desert – jollying ourselves along by spotting the latest green shoots.

And the cast of characters? Well you could take the scarecrow to be a presentation of modern environmentalism, having lost its power to shock and frighten. The Tin Man? Worrying about oil to free his joints, surely he symbolises the processes of industrialisation and urbanisation that suffer from a conspicuous lack of heart, of fundamental values, and are going into overdrive as countries like China switch on to a high-carbon diet – with the Peak Oil scenario hovering out there in the background. And the Cowardly Lion? Our politicians, who have lost their courage and their voices, responding to the latest focus group rather than to the overarching agendas of their times.

Then there is the Wizard himself, trying desperately to persuade us he is in control, and carried to Oz originally in, of all things, a hot-air balloon.

We may or may not use the Wizard of Oz storyline and cast of characters in the final report, but I would be fascinated to hear either what symbolism you see in the film – or films and characters that you think better sum up where we now find ourselves in the sustainability quest.

And which CEO (Tepco’s Masataka Shimizu in Japan would probably be a bit obvious) or politician would you most like to hear utter the Wicked Witch of the West’s immortal last words: “Look what you’ve done! I’m melting! Melting! Oh, what a world! What a world! Who would have thought a good little girl like you could destroy my beautiful wickedness? Oooooh, look out! I’m going! Oooooh! Ooooooh!” And why?

John Elkington is executive chairman of Volans, co-founder ofSustainAbility, blogs at www.johnelkington.com, tweets at @volansjohnand is a member of The Guardian’s sustainable business advisory panel