The Fort Calhoun nuclear power plant has been kept in “cold shutdown” in anticipation of the flooding that has arrived. 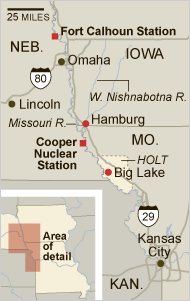 Though the plants have declared “unusual events,” the lowest level in the emergency taxonomy used by federal nuclear regulators, both were designed to withstand this level of flooding, and neither is viewed as being at risk for a disaster, said a spokesman for the Nuclear Regulatory Commission.

“We think they’ve taken all the necessary precautions and made the appropriate arrangements to deal with the flooding conditions,” said the spokesman, Victor Dricks.

One plant, the Fort Calhoun Station, about 19 miles north of Omaha, was shut down in April for refueling, and the operators elected to keep it in “cold shutdown” in anticipation of the flooding. The other plant, Cooper Nuclear Station, located downriver and situated on higher ground, is still operating.

Each of the 104 commercial nuclear power plants in the United States has a unique license issued by the federal government that details conditions under which it may operate, including what river water levels, wind speeds or hurricane surge levels require shutdowns. Reactors in Florida and Louisiana, for example, have shut down in anticipation of approaching hurricanes.

Despite the official assurances of safety, the unusual sight of a nuclear plant surrounded by water — coming so soon after the still unfolding nuclear disaster that followed the earthquake and tsunami in Japan — has prompted concern and speculation, leading one utility to add a feature to its Web site called “flood rumor control.” It says, “There has been no release of radioactivity and none is expected.”

The current flooding, which was caused by heavy rain and snow in parts of the Rocky Mountains and the Great Plains, forcing record water releases from the dams normally used to prevent flooding, has pushed communities from Montana to Missouri to create barriers to hold back the river, which is expected to stay at these high levels for much of the summer.

Al Berndt, assistant director of the Nebraska Emergency Management Agency, said he believed both plants were prepared to deal with the flooding. “I am not concerned,” he said.

Much of the attention has been focused on the Fort Calhoun plant because of recent concerns about its preparedness and the dramatic images of the structures surrounded in all direction by water, as if rising out of a lake. Earlier this month, the plant briefly lost power needed to cool the spent fuel pool after a fire that remains under investigation.

Last year, the Nuclear Regulatory Commission cited the Fort Calhoun plant for not being adequately prepared for floods and rated the safety violation in the “yellow” category, the second most serious. The agency ordered changes because it said that under the plan in place at the time, a major flood could cause core damage.

After initially contesting the findings, the plant’s operators, Omaha Public Power District, said that the problems had been resolved. Gary Gates, the president and chief executive of the utility, said in a statement in March that the company had updated and “tested and retested” the plan to protect the plant, “in the unlikely event of a catastrophic flood.”

David Lochbaum, a reactor expert at the Union of Concerned Scientists, which is generally critical of reactor safety, said the commission had found only two “yellow” problems nationwide last year but had substantially lowered the risk of problems by insisting on changes.

“Kudos to the N.R.C. for taking proactive steps last year to make Fort Calhoun better protected against this year’s flood,” he said.

The Fort Calhoun plant, which sits nearly two feet below the current river level, has taken a number of protective measures.

Makeshift barriers — including a water-filled rubber tube eight feet high and a third of a mile long — help keep water away from the vital buildings, including the training center, the administration building and a security building. “It is an added level of protection,” said Jeff Hanson, a spokesman for the utility. “If the water were up to the plant itself, it would still be protected. The plant itself is watertight.”

In addition, the utility has brought in extra workers for round-the-clock coverage and has made efforts to ensure that electricity keeps running. The plant remains on grid power, but as a precaution the utility installed overhead lines in case the underground cables shorted out. It also brought in an extra diesel generator and over three weeks’ worth of diesel fuel — with arrangements for more if needed.

“The question is, ‘Do you still have power?’ ” said Andrew C. Kadak, a former professor of nuclear engineering at M.I.T. “If they’ve got that, the plant can sit there until the water recedes. The Fukushima lesson is really that you’ve got to have electricity.”

Downriver, where the record water level set two decades ago has been broken, the Cooper plant near Brownville is still producing power, though Sunday it put out a “notification of unusual event” on Sunday.

Many of the same preparations have been taken there, but the river would need to rise more than a foot and a half to force a shutdown, said Mark Becker, a spokesman for the Nebraska Public Power District, which operates the plant. “We’ll continue to operate until we reach that level,” he said.

A. G. Sulzberger reported from Kansas City, and Matthew L. Wald from Washington.

By A. G. SULZBERGER and MATTHEW L. WALD